Mad Hatter: A writer’s reaction to The Remains of the Day
In 1993 a film based on Kazuo Ishiguro’s novel – The Remains of the Day – was released, and soon after I saw the film for the first time. That was when I knew very little about my father or his involvement in the British Union of Fascists; and almost nothing about prewar politics in England. 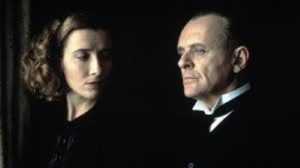 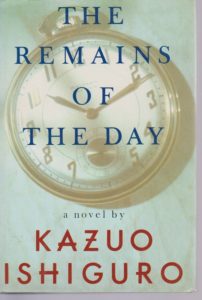 They say the body speaks. I would go further and say the body knows more than the brain, has in fact a powerful store of knowledge gathered over the course of a life. I would have been 49 years old when Remains was released, and in my early 50s when I first viewed it. I had an overpowering visceral reaction to the film – particularly, as I remember, to the pathos of the butler’s mistaken loyalty to his fascist employer, Lord Darlington. It was his toadying attitude to the men he served, gathered at Darlington’s for a meeting on government policy as war approached, that overtook me with an emotional wave that almost caused me to leave the cinema. But I did not, and I have since watched The Remains of the Day numerous times. Lord Darlington and his group strove for appeasement with Germany, and the people they met with were members of the Nazi party.

It is a very different story from Mad Hatter, though the political background is the same. My father was not a member of the aristocracy. Though a middle-class man, he was perhaps more in line with the butler, with his misplaced loyalty to Oswald Mosley, leader of the British Union of Fascists, and his pride in leadership of a small northern branch of the party. I in turn felt proud of my father and fiercely loyal. Even though he was a taboo within our family, I placed him on a clandestine throne, in secret of course, for my own protection, because I was a cowardly rebel. I knew nothing about him or his politics; it was all a matter of feeling, and feelings were not allowed in our family. I spent a great deal of time crying for no apparent reason, running the emotions for everyone – my mother, my siblings, all the tight-lipped aunts and grandparents who never spoke of my Very Important Father.

So, to discover my father a mistaken nonentity, a nobody – though not analyzed as such – was devastating. As I said, my reaction to the film was visceral, springing from the body, bypassing the articulating brain – just as Stevens, the butler, realizes towards the end of the film the shame surrounding Lord Darlington, and denies a connection with him when questioned by the barman in a Weymouth pub, masquerading rather as aristocracy himself until he is recognized, by his comportment, as a man of service.

It is a devastating moment for Stevens: the loss of his love, Miss Kenton the housekeeper, who he has just been to visit and found married; the loss of his master, who has died and been discredited in post-war England; the loss of an entire life of loyalty to the wrong cause. Further than that Stevens was a reminder for me, as an emigrant to Canada at age 23, of the cringing obedience and closing down of moral judgement that British institutions can produce in their charges.

This is the power of art, to strike an essential chord in the reader or viewer, to bring them to a realization that changes forever their course. Ishiguro’s work was one of the many catalysts on my path towards the writing of Mad Hatter.

WW1 was ‘the war to end all wars’, then ‘never again’ we said after WW2. We thought fascist politics to be ‘old hat’ in England, but now we see a global, and particularly European, British, and American wave of just that. Mad Hatter is a timely and prescient story of how nationalism and xenophobia can affect a family and a man of privilege, shaping future generations.