The most readily understood wartime internment for North Americans is of the Japanese during WW2. There are films and books on the topic – Snow Falling on Cedars by David Guterson (both book and film), Obasan, a novel by Joy Kogawa. That period of internment is a blot on North American history.

But few people are aware of the British internments during WW2. They began in Sept 1939 with the outbreak of war, expanded in May 1940 when Churchill, then in power as Prime Minister, said “Collar the Lot,” and extended for some detainees until the end of the war.

I have learned about Defence Regulation 18B while researching my father’s life for the writing of Mad Hatter. It was one of the Defence Regulations used by the British Government duringWW2, allowing the internment of people suspected of being Nazi sympathisers. The effect of 18B was to suspend the right of affected individuals to habeas corpus.  https://en.wikipedia.org/wiki/Defence_Regulation_18B

At the outbreak of war there were around 80,000 potential enemy aliens in Britain who, it was feared, could be spies, or willing to assist Britain’s enemies in the event of an invasion. All Germans and Austrians over the age of 16 were called before special tribunals; many were German Jews who had sought refuge in England. When Mussolini joined the war in June 1940 Italian residents of England were interned. Mosley, his wife Diana Mitford, and many of Mosley’s followers were interned, along with Finns and other “enemy aliens” on the wrong side of the war.  https://www.bbc.co.uk/history/ww2peopleswar/timeline/factfiles/nonflash/a6651858.shtml

My father’s experience of detainment under Rule 18B began with his arrest at our home in June 1940. He was taken to Walton Gaol near Liverpool where he remained in solitary until early August when he was moved to Ascot Camp with 750 men to be housed in the winter quarters of Ringling’s circus animals. In mid-August 1940 he was taken to Latchmere House in London for special interrogation by MI5. This outfit was run by Colonel Robin Stephens, nick-named ‘Tin-Eye’ for the monocle he wore. Stephens was a particularly sadistic man who had developed his own method of breaking people psychologically. My father was not the only ex-Latchmere prisoner to eventually commit suicide. After a return to Ascot Camp and a spell at York Race course, he was sent in April 1941 to Peveril Camp on the Isle of Man – a remote island in the Irish Sea – where he remained until his release in June 1943. 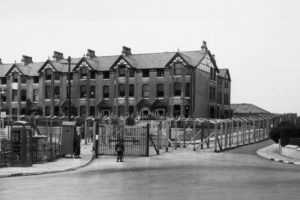 Some interesting books about the Isle of Man as a prison camp are David Baddiel’s fictionalized account of his Jewish grandfather’s internment – The Secret Purposes – and Connery Chappell’s Island of Barbed Wire.

The significant part of the internment story is that none of these men and women were given access to legal help or afforded a trial or a hearing. They were simply “collared” and locked up, denied the basic human right of habeas corpus under Rule 18B during wartime.

There are many tragic ironies to this situation. The detainees were a mixed bag of people ranging from British Union of Fascists supporters like my father, to Jewish artists and intellectuals who’d had the foresight to flee Nazi Germany and seek refuge in Britain. What they had in common was being under suspicion of Nazi sympathy. The irony for my father was that his Nazi sympathies came only at the end of his three-year internment when his mind had been turned, and then it took a very peculiar turn. He had started out as a pacifist who admired Mosley’s political stance for appeasement. While interned finally in Peveril Camp he came under the influence of religious fanaticism which led to a disastrous confusion of religion and politics that threw him into severe cognitive dissonance.

I have not been to the Isle of Man myself, but my cousin and his wife made a research trip there and found the house where my father was lodged. They shared with me photographs and information that has been invaluable in imagining my father’s two-year internment there. 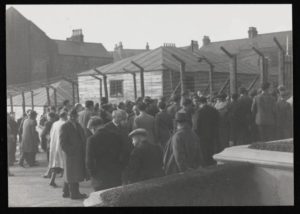 I have received enormous support from family members, both close and extended, in the research which has led to the writing of Mad Hatter.  Their testimony has given me a perspective that was not available in our house where the shame of our father’s internment and his subsequent breakdown (not recognized as such in that time) made us secretive and ashamed. Some of these people have made their way into Mad Hatter in a veiled pseudonymic way, not as their true selves, but as people who state or show opinions regarding my parents.

I was held up for years in embarking on this project, until I decided to fictionalize the story. And then it flowed, because I am indeed a fiction writer, not a biographer. In any case I did not have enough reliable information for a biography of my father. On the contrary, I started out writing in an attempt to find out more about this mystery man, but I have discovered that he is unknowable in the way that a daughter might want to know and understand her father. I have instead been able to walk in my mother’s shoes and understand better why she was as she was – a complicated and unpredictable woman who lived over top of an enormous grief and humiliation, apparently cheerfully until the end, in her 90s, when she cried and cried for no apparent reason.

Mad Hatter is a fictionalized memoir because, though I have complete emotional recall of growing up in my family in post-war England, I have not had access to all the facts. Family testimony, though helpful, is not reliable for a fact-based book. In any case it is the tenacity of emotional memory that makes us, and that keeps our dead alive. It surprises me at every turn.