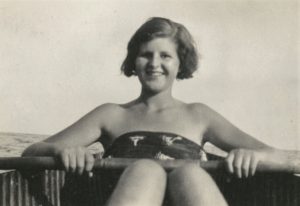 Cynthia Brooke, the central female character in Mad Hatter is based on my own mother, also named Cynthia. She was a Francophile who had been sent to Paris to live with a family and learn French. This period was, I believe, the heyday of her life; ironic considering the sense of promise and a brilliant future she must have felt at that time. Just as she became fluent in French and passionate about Parisian life, she was called home by her father to dreary England. When she got over the culture shock she entered into the social scene, became engaged to the man who was to become my father, married and had children. She’d had no chance at further education, at becoming worldly, living for herself, developing character. She remained a pampered, politically naïve girl from an upper middle-class family where women deferred to men.

But she maintained her love of French culture and her memories of Parisian life. She always spoke fondly of Mireille Plasse, the daughter of Monsieur and Madame Plasse, her hosts in Paris. What I gleaned from our conversations about that time was her sense of freedom in Paris; the triumph of learning another language, her love of fun and flirtation, meeting new people, gaining a French sister in Mireille.  I don’t know what happened to the real Mireille, but in my novel she joins the Resistance and is captured by the Nazis and sent to Auschwitz-Ravensbruck. A highly recommended book on this topic is A Train in Winter by Caroline Moorehead.

I was in Paris with Cynthia a couple of times where she practiced her then rusty French and took delight in eating ice cream with cassis. We sat in the Jardin de Tuileries where she had given English lessons to children in her youth; now she spoke reluctantly about my father as I questioned her. We went to the Louvre and mingled with the other tourists. We ate at outdoor restaurants and cafes, went to son et lumiere on a chilly evening. She lived then with her second husband on the island of Jersey, very close to France, and we often took the hydrofoil over to St. Malo, an ancient walled town, and wandered the cobbled streets, shopping in markets for cheeses and French bread, braids of garlic, special meats, fruits and vegetables that she remembered eating as a girl in Paris. When she told those stories it was like watching a movie for me – her vivid descriptions, the pleasure she took in it, a joyful aspect of our frightening mother who had typically been miserable and impatient and angry with us as children.

St. Malo – featured in All the light we cannot see by Anthony Doerr

I had no idea at that time of what she had suffered as a result of my father’s internment. The man she had married and bore four children to never came back. It was a stranger who returned from three years of internment, solitary confinement and interrogation by MI5, and who came to live with us as though everything was normal. Even when I learned the facts about those war years and the aftermath – the affect it had on our family and particularly on our mother – the knowledge was only in my head until I began to write Mad Hatter, and rewrite and rewrite – 80% of a novel is in the rewriting. It was during that process that the knowledge integrated into an emotional understanding of my mother’s endurance. When you create characters for a novel you must become them. It’s like acting. When you walk in their shoes you begin to understand them feelingly. I have dwelt in Mad Hatter on my mother’s reminiscences of her life in France because it humanizes her as a character; gives the reader a window into who she might have been had circumstances been different. We are all subject to our time and circumstance.

Aside from understanding Cynthia better through the writing of Mad Hatter, I have always had a feeling of her emotional life because I am similarly patterned, imprinted by my solitary childhood at her side. After my three siblings went away to boarding school, before my stepfather entered the scene, I was her anchor, the only one, closely guarded and controlled.

Now I recognize her in myself, my emotional responses similar to hers, and I allow her to travel with me and live through me. I light a candle to her every day, I speak to her, I miss her, though rationally I do remember how impossible she was because her true being was hidden. She hated my father and loved him, and so, being conflicted, would not speak of him. He was “JL” which, being a child wordsmith, I associated with Gaol. His name was his condition, and the reason for his absence.

Cynthia was sent to France to stay with business associates of her father – a middle class version of Finishing School – because she was a privileged child. But she was kept on a short rein financially, made anxious and subject to Grandpa’s whims. It was a double-edged privilege. All her life she was presented with something that appeared hopeful and positive, but turned out to be something different, lesser.  Grandpa’s offer of France, my father’s offer of marriage and a future, her second marriage to an unhealthy miserly man who tried to control her. She was his trophy wife and had to act and dress accordingly.

In her widowhood Mum ventured into trousers – something our stepfather had never allowed her to wear though, by the 1960s, early in that second marriage, many women were wearing trousers. Girls were gaining the right to wear pantsuits in the typing pool. When Cynthia got over her grief and the strange phenomenon of living alone for the first time in her life – after a period of volunteering for church suppers and ironing the Vicar’s laundry – she began cruising on the QE2 with a widowed neighbour – learning how to spend money of her own for the first time – wildly and  haphazardly on tourist junk at the cruise stops, because she could, because it was hers. And she wore trousers in China, perhaps to fit in since all the women there wore them. 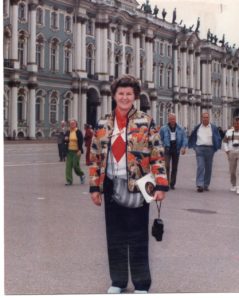