I’d been sitting on this story all my life, too afraid to tell it because, I had told myself, it’s not important, everyone’s got a better story. But the real reason was, it felt too shameful.  Wanting to be heard, yet afraid to tell: this dynamic has governed all my communications, essentially silencing me until now. And yet I knew from childhood that I was the one charged with the telling; not to defend or vindicate, simply to tell, from my own perspective.

The information I needed in order to write about my father was available within the family but it didn’t sink in. My brain was programmed to bury unacceptable revelations, letting them drift away into the mist that surrounded any mention of my father. Family testimony was in any case conflicting, and therefore confusing. 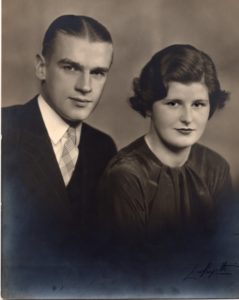 My research began in the summer of 1983 with an extended trip to England to conduct a series of family interviews. My mother, Cynthia of course had the mother-lode, but she was reluctant to talk about my father. “Why are you always harping on the past?” she would ask me. What else was there? All my efforts to move forward were into the fog which, instinctively, I knew could only be cleared by delving into our family history.

We used to have “family sessions” with my three siblings gathered around in their pyjamas in the bedroom I shared with my mother as a child. I would hug my knees in anticipation, waiting for something wonderful to be revealed, but there was only chatter about the day’s events, family gossip, plans for tomorrow. It was always the unspoken that interested me; what I could sense rather than what was revealed verbally, and the weight of it was enormous. One of my literary icons, British playwright Harold Pinter, when asked what his quintessentially British plays were about, said “the weasel under the cocktail cabinet.” My paternal grandmother had a cocktail cabinet in her living room. It smelled of spirits and old cherry wood. Granny would open the doors of the cabinet and pour tiny glasses of Dubonnet, smiling, always smiling, long after the disgrace and suicide of her son. For me, Pinter’s weasel lived under Granny’s cocktail cabinet.

They all had different versions of who my father was – my sisters, my brother in Canada, my aunts, my reluctant, tight-lipped mother, my cousins. I was left with a strange pastiche of material that didn’t really add up to anything more than a general confusion. I could have fit it into the picture I wanted to make of my father, but I didn’t want to succumb to that kind of false research – forming an opinion and including only the information that backed it up.

Life claimed me, and it was another twenty years or so before I resumed my research in earnest. Then it took me to many places, most of them in England. I rented a car and drove to Southport where I tracked down the last three addresses where my father had lived after he left us. At one of them I spoke with the daughter of the woman who had been the landlady during my father’s occupancy in the 1950s, and I got a good picture of the kind of place it had been – where transient renters such as touring theatre groups would stay. You never think of it at the time, but eventually these things translate into scenes, as this snippet became a scene in Mad Hatter where Christopher Brooke sits at the breakfast table with a colorful group of pantomime artists on a Cinderella tour. In my youth I was a chorus dancer in a touring pantomime, so I know the territory.

I visited the Hat Factory that I wrote about in my last blog, which shows a photo of my father working on the factory floor. I researched various Archives where records had become available to the public with the declassification of war information, and in the Imperial War Museum where I pored over books and documents. The Birmingham Archives had lots of stuff on the British Union of Fascists and Oswald Mosley; at the National Archives near Kew Gardens I found correspondence specifically about my father, from the internment camp commandant on the Isle of Man. As any researcher knows, this process is largely one of sifting through papers looking for the occasional gem – something new, something specific, a eureka moment!

My research took me twice to Ireland, where I learned that we have Irish heritage on my father’s side. Incredibly, we had never known that. In County Monaghan there are many people with my family name – Battersby – and a second cousin I met for the first time told me about the Irish heritage. On the second visit I was blessed with an invitation to Sligo, and the kindness and hospitality of relative strangers who fed me information about County Cavan where my Irish narrator Mary Byrne is from. It was through this trip that I gained enough confidence to give full voice to Mary Byrne who is in fact my best character in Mad Hatter, and one of those rare gifts to a writer, coming out of the blue as she did with a fullness and ease in her story-telling, and a way of holding the Brooke family together with her liveliness and wit.

Another vital part of my research was a visit to Latchmere House in London where my father had been held for interrogation by MI5; also near to Kew Gardens and the National Archives. (More on this in my next post).

I have had help from many people during my research. Robert Best, a British archivist and researcher, contacted me on the internet many years ago and has been invaluable to my research, providing me with crucial information in the form of newspaper articles and books pertaining to my father’s background. When I eventually met Robert on a trip to UK he took me to another important location – River House in Petworth, West Sussex, an early commune where my father had been involved. (More of this too in my next post).

Steve Paulsson, friend and historian, has been an invaluable source of information. He was the senior researcher on the Holocaust exhibit at the Imperial War Museum, and has been steeped in WW2 history, which is an enigma to most of us. While Mad Hatter is not actually about the war per se, the events of that war are the context and background of the story, driving the narrative like an invisible force of destiny. Steve has helped me to judiciously place the essential aspects of the progress of the war; to embed the facts in an unobtrusive but informative way, with accuracy and precision.

The research for Mad Hatter has affected my sisters. It has unearthed half siblings – two living, two deceased – written about in Blog #2 – A Novelist’s Quest For Family and Identity. I have sensed my sisters’ upset and resistance and I feel the need to protect them, but the story once begun has no way of stopping. Stories are insistent; they need to be told; a story set down on the page gains a life of its own, and a hold over the author and the readers.

Any writer will tell you that research can become obsessive. There is always more to uncover but eventually you have to stop researching and just tell the story with what you have. Although the research does continue to some extent in tandem with the writing. And of course, there is the constant on-topic reading, as well as the viewing of films and videos. At the back of Mad Hatter is a list of books which have been immensely helpful to me in the writing of this novel. A couple that I particularly want to mention are by British journalist Ian Cobain – Cruel Britannia: A Secret History of Torture (2012) and his subsequent book, The History Thieves (2016). These books impacted me so strongly because Cobain is reporting on the culture of secrecy surrounding the British state, past and present. As someone who grew up in England with my own particular family history, I am doubly a product of this culture. It was a surprise and a relief to discover that this secrecy is not a real part of me, but of the environment in which I grew or, more accurately, was stunted and silenced. I met with Mr. Cobain in London last year. Our meeting was absolutely affirming for me, and helped me to move forward in the final steps towards publishing Mad Hatter. He is a compassionate and caring man, practising journalism in a world gone mad with war. The History Thieves begins with the 1889 passage of the Official Secrets Act and traces the results of that Act up to the present day.

Another essential book, and one which allowed me to somewhat collaborate with my dead father, was a slim volume he published in 1947, documenting his prison and internment experiences. I have also used, and attributed to my father, three lines of poetry written by my brother and found amongst his papers after his death in April 2000.

My hope is that my sisters will be able to complete their reading of Mad Hatter. It is a long book, and a painful story. However, whether they know it or not, they have accompanied me on this journey, and if my brother were still alive, he would be subject to this story too.

The weasel under Granny’s cocktail cabinet attests to the insistence of our wild, furtive inner lives as we politely sip sweet Dubonnet in a familiar setting, performing a play of well-rehearsed sentences and phrases made acceptable by repetition.