Dear Friends and Readers, this will be the final Mad Hatter Blog. The book is now in print, and I have been selling many copies on Hornby Island throughout August, though the official launch will be on September 8 in Toronto at the Kensington Market Supermarket Bar 3.30pm; with a further reading October 9, 6-8 pm at Toronto’s Queen Books in the east end.

To purchase a copy please order from your local indie bookstore, or order online from my publisher  https://www.guernicaeditions.com/title/9781771833905

I thank you for your support and interest in these blogs, and hope you will enjoy the novel as much as you have enjoyed the background information on the story and on my research.

If you like the book please consider rating it and writing a short review for Goodreads:

I did not set out to make any judgement or vindication; only to tell the story of a family, and how that family was affected by the father’s political alliance.

Guy Aldred wrote the foreword to John Wynn’s book, It Might Have Happened to You.      Britain’s “Guantanamo Bay” – a contemporary account of how British citizens were arrested and imprisoned without charge or trial under Regulation 18B.

The Editor, Guy Aldred, was a dedicated, life long socialist. Wynn was a follower of Oswald Mosley and a member of the British Union of Fascists, Aldred was not.  Here is what he says in his foreword: “I have practically no political sympathies with the individuals now interned, as individuals. Were they free I would be their opponent. But they are imprisoned without charge or trial. They are not tried because no charge can be brought against them. Many of them were soldiers and suffered in the first Great War, which I opposed, as did some members of His Majesty’s Government. Under these circumstances, I dare to come forward, not as an apologist for their opinions, but as the defender of their civil rights. (my emphasis)

I had always been ashamed of my father’s Mosleyite politics though it was more an instinctual feeling than one based on knowledge. I knew nothing about Mosley or his politics. Only during these years of research have I learned how Mosley’s pacifist politics became tarred with the brushes of anti-Semitism and fascism.

My political life, once it started in my early 30s, consisted of feminist and left-leaning views, though I always felt unsteady within a ‘political environment,’ due to a history of family taboo around any kind of politics other than Conservatism.

In my research for Mad Hatter I learned what Mosley’s British Union of Fascists stood for – basically pacifism and appeasement. Mosley, like the British royal family and aristocracy, was pally with Hitler and his National Socialist cronies; and, like Churchill, he was an admirer of Mussolini. British Union stood for England first, keep the foreigners in the colonies, and never repeat a war like WW1 in which a whole generation of men had perished, and those that remained, Mosley included, had been injured. The word “fascism” did not have the connotation it has today until after WW2. During the 1930s all sorts of people from the aristocracy through the middle and working classes were attracted to its ideology. 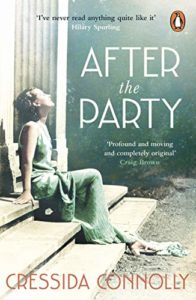 It is the summer of 1938 and Phyllis Forrester has returned to England after years abroad. Moving into her sister’s grand country house, she soon finds herself entangled in a new world of idealistic beliefs and seemingly innocent friendships. Fevered talk of another war infiltrates their small, privileged circle, giving way to a thrilling solution: a great and charismatic leader, who will restore England to its former glory.   (Sound familiar?)

The membership grew and the rallies became huge. British Union was infiltrated by anti-Semites who tainted the entire group and eventually caused riots and fighting between the east end London Jewish community and the Aryan members of British Union. Though anyone with some knowledge of the time, and of British culture will know that anti-Semitism is rife in England, as is racism and prejudice of all kinds. Israel was formed on the basis of the Brits’ desire to get rid of the Jews – isolate them, give them a home of their own far away from Britain and Europe, even though it betrayed and ultimately displaced Palestinians who had lived on that land for generations. So, the opinions of Mosley and of my father were not at all unusual in the UK. And, in today’s political climate, it must be admitted that we have come full circle, in both Britain and the United States, as well as in many European countries.

During my research I have been contacted by some members of the older generation and some younger fans of Mosley, particularly in the Friends of Mosley group. Support for Oswald Mosley and his political stance continues and unfortunately may be associated by some with a European Right-Wing wave of thuggery.

However, in looking at the basic tenets of British Union one can see that they started out as pacifists, proponents of women’s rights, and supporters of labor unions.

We have evolved very fast since WW2, in values, in technology, in lifestyle and global knowledge.  Mosley and his followers were reviled after the war; no-one stopped to think what might have happened if indeed war had been avoided. WW2 was like a runaway train that raged round the world toppling governments, monarchies, and hordes of civilians until it finally stalled and the cold war began – a whole new era of politics, and one that Churchill had feared from early days.

I take no stance. My work as a novelist is to report on what I have learned, to dramatize it and weave a family story around it. I am not going to rewrite history. Shit happened and my family got splattered with it, along with everyone else. There are no solutions here. There are human stories. I have come to realize that very few people really know what happened in that sprawling war. I have found myself caught in one small niche of the fallout and that is what I have to tell. Readers will draw their own conclusions or revert to the safety of the story written by the victors.